← more from
Father/Daughter Records
Get fresh music recommendations delivered to your inbox every Friday. 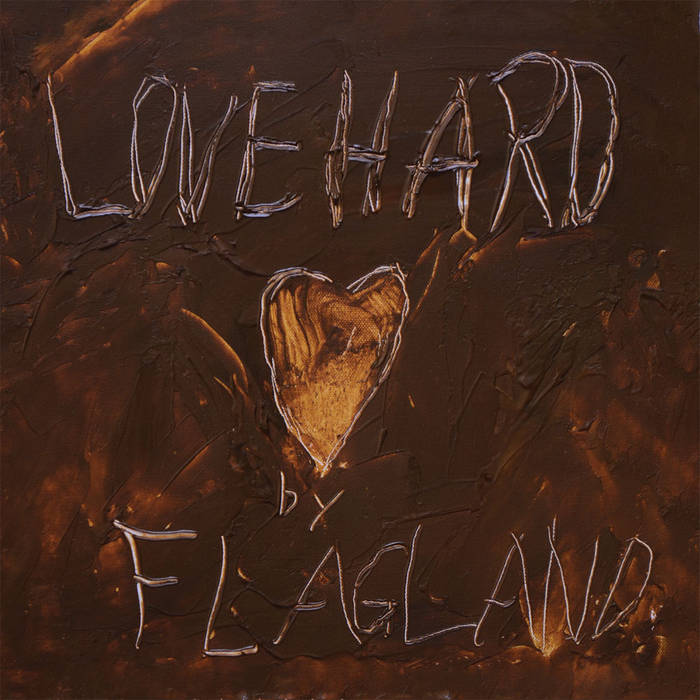 The making of Flagland stems from a long, connected lineage. Before moving to their now home of Brooklyn, Kerry Kallberg (vocals, guitar) and Dan Francia (bass, vocals) grew up a block away from each other, attending elementary up through high school together. Nick Dooley (drums) entered the picture at NYU, where Francia recalls saying “I’m gonna be in a band with that kid” after they met in class their first year. Francia’s brother Ian originally sat behind the drum kit in 2010, but was quickly replaced by Dooley in early 2011 when he joined last minute for a show on his birthday. Since then, the self-coined “panic rock” trio has released two full lengths and most recently, a split with Big Ups (Dead Labour Records).

Love Hard is Flagland’s third album, and at twenty tracks, speaks volumes to their songwriting stamina and dedication to doing things on their own terms. The recording process was piecemeal, done sporadically by the band between shows, and with the exception of drums at Let ‘Em In Music in Brooklyn, was recorded and mixed in Dooley’s apartment. Fast forward a few months – Flagland enlists engineer Paul Gold (The War on Drugs, Double Dagger) for mastering and signs with Father/Daughter Records.

The themes weaving throughout Love Hard can be summed up with a few key words: Love hard. Fight hard. Live hard. No matter how shitty of a hand you’re dealt, give it all you’ve got. The same can be said for the variance of musical styles on Love Hard. Equal amounts of ferocity are heard on the bipolar “Comfortable Life” and bleak, hard-hitting “Monster,” as on their musical antithesis, the jubilant power-pop “Sugarcube.” Flagland is a multi-dimensional band that is impossible to label or define. Everything is open to interpretation.

Happiness is just a word.

Rodents skittering across the wasteland floor: that's the company I like to keep.

Bandcamp Daily  your guide to the world of Bandcamp

Bonobo stops by to talk about his new record Fragments